Finally I was able to complete my trip to Grenoble to speak at Alpes JUG on the 29th of March about all things Infinispan, and I must say that I through fully enjoyed the experience. On arrival I was greeted by one of my JBossian colleagues, Chris Laprun, who lives in Grenoble.

After spending a few hours hanging around, we headed for the location of the Alpes JUG, where I met by Ludovic Poitou and other members of the JUG. The talk involved me speaking for 2 hours giving an overall view of Infinispan, while developing a simple application that would showcase Infinispan’s capabilities. As always with live demos, one or two things didn’t go fully according to plan, but overall the demo worked fine. For those who attended, remember that the demo code can be found here.

After the talk I had the chance to meet the attendants of the JUG where we discussed about caching, data grids, Hibernate 2nd level cache…​etc. Having had some pizza slices, Chris and I moved on to a pub in the old part of Grenoble where we’re able to watch my dear Athetic Bilbao crash Shalke 04 in the Europa League :).

Next day Chris and I met with another of the Alpes JUG leaders, called Emmanuel Hugonnet, with whom we had some lunch. I must say that I felt in love with the local cuisine having tried some local rather pinky sausage with cold lentils with mustard (what a great combo!). Here’s a pic: 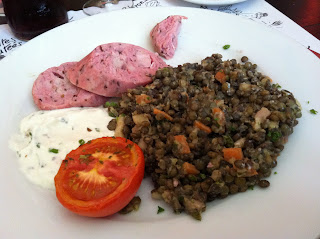 It was a joy being invited to speak at Alpes JUG and I’d certainly recommend it to any Java speakers out there! I hope to come back some other time :).

So, what’s next? Next week I’m speaking at Miracle Open World 2012 in Billund’s Legoland park, where I’ll be joined by two other JBoss colleagues, Max Andersen and Thomas Heute. In this rather atypical conference, I’ll be speaking about measuring performance of in-memory data grids, and about building transactional, scalable Infinispan applications. I was already speaking at this conference last year, and together with GeeCON, this was one of my favourite conferences of 2011. Can’t wait for next week!

I’ve just returned from Codemotion Rome where I delivered a talk on Infinispan. This was my first time presenting Codemotion: a very big conference with lots of young enthusiasts and very interesting presentations. A BIG thanks to the organisers for the excellent job they did and for the opportunity to share so many good ideas!

Doug Lea and the folks on the concurrency-interest group have been hard at work on an update of JSR 166 (concurrency utilities) for Java 8 - called JSR 166e.  These include some pretty impressive changes in a building-block we’ve all come to rely pretty heavily on, the ConcurrentHashMap.

One if the big drawbacks in the ConcurrentHashMap, since it was introduced in Java 5, has always been memory footprint.  It is kinda bulky, especially when compared to a regular HashMap - 1.6 kb in memory versus about 100 bytes!  Yes, these are for empty maps.

In Java 8, one of the improvements in the ConcurrentHashMap has been memory footprint - now closer to a regular HashMap.  In addition to that, the new Java 8 CHM performs better under concurrent load when compared to its original form.  See this discussion and comments in the proposed ConcurrentHashMapV8 sources for more details.

So, Infinispan makes pretty heavy use of ConcurrentHashMaps internally.  One change in the recently released Infinispan 5.1.2.Final is these internal CHMs are built using a factory, and we’ve included a version of the Java 8 CHM in Infinispan.  So by default, Infinispan uses the JDK’s provided CHM.  But if you wish to force Infinispan to use the backported Java 8 CHM, all you need to do is include the following JVM parameter when you start Infinispan:

We’d love to hear what you have to say about this, in terms of memory footprint, garbage collection and overall performance.  Please use the Infinispan user forums to provide your feedback. 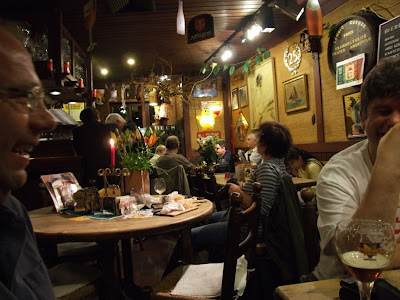 Infinispan and Seam are doing it again, and this year Arquillian will be there to keep things in check: a community social in the midst of Europe’s premier Java conference, Devoxx in Antwerp. If you plan to be at Devoxx - or just happen to be nearby - and fancy an evening of in-depth conversation about three open source projects set to rock the enterprise, come on by and partake in some of the finest beer in the world with the project core developers. Demos, design discussions, architectural questions are all fair game. Join our pilgrimage to Kulminator at 20:00 on Monday the 15th of November (near the Groenplaats Station).

And a quick note, just because open source is all about Free as in Speech doesn’t mean we can’t have free beer. Yes, we’re sponsoring beer as well as other project-related goodies, but these are limited, first come first served.

Details Where: Kulminator, close to Groenplaats Station, Antwerp When: Monday the 15th of November, 2010 What time: 20:00

Hope to see many of you there!

I’d like to welcome Infinispan’s newest full-time core engineer, Trustin Lee.  Trustin’s no stranger to open source software, being the founder and project lead of Apache MINA and Netty - the latter of which is used in Infinispan’s memcached and Hot Rod server endpoints.  Trustin will be working on all things Infinispan, adding muscle to the core development effort.  Trustin’s based in Seoul, South Korea.

JUDCon and the JBoss Community Awards

The first-ever JUDCon kicked off on Monday, and was very well received. It was good to see so many from the Infinispan community, and be able to discuss ideas and thoughts in detail.  I’m hoping to see even more Infinispan-related activity at future JUDCon events.

The JBoss Community Recognition Award winners were also announced at JUDCon, and I was really surprised to find that 4 of the 5 winners were Infinispan contributors.  Sanne Grinovero, Alex Kluge, Phil van Dyck and Amin Abbaspour - thanks for your participation in Infinispan, your peers have recognised your contributions and have voted with mouse clicks!  Congrats!

Given how many Infinispan engineers and contributors are at JBoss World this week, we are having an open Infinispan 5.0 planning and roadmap session.  So if you are around and would like to join in, this will be at 4:00pm on Thursday, in Campground 1.  For those of you not able to make it, discussions will continue via the usual channels of IRC and the developer mailing list.

A follow-up on the joint SEAM and Infinispan community event at Devoxx, this year, the event will be held on Friday, 20 November, at ViaVia Antwerp (http://www.viaviacafe.com/) with the doors opening at 16:30. The first talk will begin at 17:05 with the second one ending by 19:30. Food to follow, lots of interesting discussion, Q&A, etc. We look forward to seeing you all there!

We’re hosting an Infinispan community day in Antwerp in November, just after Devoxx 2009. This will be on Friday, just after the main conference finishes. Expect core Infinispan committers to be around, running demos and answering specific questions. Buy a beer, get a question answered. :-) This session will also be co-hosted alongside the SEAM community session, so you get 2 interesting techs in one go! The venue is TBD but I will post more details on this shortly. It will be close enough to the main conference venue though.

This is a free event, but please register so we can keep track of numbers.

And FYI, I will be speaking at the conference on Infinispan and the future of data grids - I do hope to see you there!