Infinispan as a LOCAL cache

While Infinispan has got the distributed, in-memory data grid market firmly it in its sight, there is also another aspect of Infinispan which I feel people would find interesting.

At its heart Infinispan is a highly concurrent, extremely performant data structure than can be distributed, or could be used in a standalone, local mode - as a cache. But why would people use Infinispan over, say, a ConcurrentHashMap? Here are some reasons.

*Easy to configure, easy to use*

is enough to get you started, with sensible defaults abound. (More detailed documentation is also available).

All the features above are exposed via an easy-to-use Cache interface, which extends ConcurrentMap and is compatible with many other cache systems. Infinispan even ships with migration tools to help you move off other cache solutions onto Infinispan, whether you need a cache to store data retrieved remotely or simply as a 2nd level cache for Hibernate.

In the process of testing and tuning Infinispan on very large clusters, we have started to put together a benchmarking framework. As a part of this framework, we have the ability to measure cache performance in standalone, local mode. So in the context of this blog post, I’d

like to share some recent performance numbers of Infinispan - a recent snapshot - compared against the latest JBoss Cache release (3.2.2.GA) and EHCache (1.7.2). Some background on the tests: 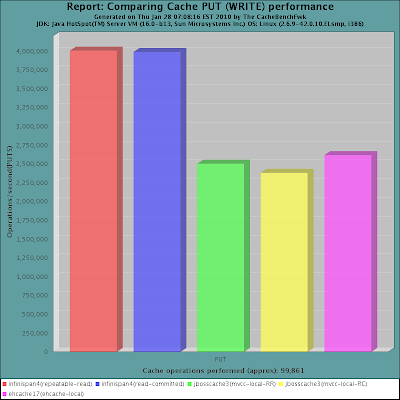 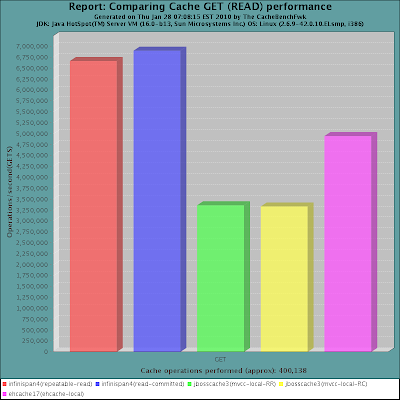 In summary, what we have here is that when run in local mode, Infinispan is a high-performance standalone caching engine which offers a rich set of features while still being trivially simple to configure and use.