In the previous post we showed how to manipulate the Infinispan Docker container configuration at both runtime and boot time.

Before diving into multi-host Docker usage, in this post we’ll explore how to create multi-container Docker applications involving Infinispan with the help of Docker Compose.

For this we’ll look at a typical scenario of an Infinispan server backed by an Oracle database as a cache store.

All the code for this sample can be found on github.

In order to have a cache with persistence with Oracle, we need to do some configuration: configure the driver in the server, create the data source associated with the driver, and configure the cache itself with JDBC persistence.

Let’s take a look at each of those steps:

Obtaining and configuring the driver

The driver (ojdbc6.jar) should be downloaded and placed in the 'driver' folder of the sample project.

The module.xml declaration used to make it available on the server is as follows:

The data source is configured in the "datasource" element of the server configuration file as shown below:

and inside the "datasource/drivers" element, we need to declare the driver:

The last piece is to define a cache with the proper JDBC Store:

From now on, without using Docker we’d be ready to download and install Oracle following the specific instructions for your OS, then download the Infinispan Server, edit the configuration files, copy over the driver jar, figure out how to launch the database and server, taking care not to have any port conflicts.

If it sounds too much work, it’s because it really is. Wouldn’t it be nice to have all these wired together and launched with a simple command line? Let’s take a look at the Docker way next.

Docker Compose is a tool part of the Docker stack to facilitate configuration, execution and management of related Docker containers.

By describing the application aspects in a single yaml file, it allows centralized control of the containers, including custom configuration and parameters, and it also allows runtime interactions with each of the exposed services.

Our Docker Compose file to assemble the application is given below:

To start the application, just execute

To inspect the status of the containers:

Infinispan usually starts faster than the database, and since the server waits until the database is ready (more on that later), keep an eye in the log output for "Infinispan Server 8.2.5.Final (WildFly Core 2.0.10.Final) started". After that, both Infinispan and Oracle are properly initialized.

Let’s insert a value using the Rest endpoint from Infinispan and verify it was saved to the Oracle database:

To check the Oracle database, we can attach to the container and use Sqlplus:

It’s also possible to increase and decrease the number of containers for each of the services:

A thing or two about startup order

When dealing with dependent containers in Docker based environments, it’s highly recommended to make the connection obtention between parties robust enough so that the fact that one dependency is not totally initialized doesn’t cause the whole application to fail when starting.

Although Compose does have a depends_on instruction, it simply starts the containers in the declared order but it has no means to detected when a certain container is fully initialized and ready to serve requests before launching a dependent one.

One may be tempted to simply write some glue script to detect if a certain port is open, but that does not work in practice: the network socket may be opened, but the background service could still be in transient initialization state.

The recommended solution for this it to make whoever depends on a service to retry periodically until the dependency is ready. On the Infinispan + Oracle case, we specifically configured the data source with retries to avoid failing at once if the database is not ready:

When starting the application via Compose you’ll notice that Infinispan print some WARN with connection exceptions until Oracle is available: don’t panic, this is expected!

Docker Compose is a powerful and easy to use tool to launch applications involving multiple containers: in this post it allowed to start Infinispan plus Oracle with custom configurations with a single command. It’s also a handy tool to have during development and testing phase of a project, specially when using/evaluating Infinispan with its many possible integrations.

The return of the Cassandra CacheStore

Ever since we spruced up our Cache Store SPI in Infinispan 6.0, some of our "extra" cache stores have lied in a state of semi-abandonment, waiting for a kind soul with time and determination to bring them back to life. I’m glad to announce that such a kind soul, in the form of Jakub Markos, had the necessary qualities to accomplish the resurrection of the Cassandra Cache Store.

Apache Cassandra is a database with a distributed architecture which can be used to provide a virtually unlimited, horizontally scalable persistent store for Infinispan’s caches. The new Cassandra Cache Store leverages the Datastax Cassandra client driver instead of the old Thrift client approach, which makes it much more robust and reliable.

In order to use this cache store you need to add the following dependency to your project:

You will also need to create an appropriate keyspace on your Cassandra database, or configure the auto-create-keyspace to create it automatically. The following CQL commands show how to configure the keyspace manually (using cqlsh for example):

You then need to add an appropriate cache declaration to your infinispan.xml (or whichever file you use to configure Infinispan):

It is important the the shared property on the cassandra-store element is set to true because all the Infinispan nodes will share the same Cassandra cluster.

The cache store uses Cassandra’s own expiration mechanisms (time to live = TTL) to handle expiration of entries. Since TTL is specified in seconds, expiration lifespan and maxIdle values are handled only with seconds-precision.

In addition to this, when both lifespan and maxIdle are used, entries in the cache store effectively behave as if their lifespan = maxIdle, due to an existing bug https://issues.jboss.org/browse/ISPN-3202.

So, try it out and let us know about your experience !

We’re pleased to announce the final release of Infinispan 6.0 "Infinium". As announced, this is the first Infinispan stable version to be released under the terms of Apache License v2.0.

This release brings some highly demanded features besides many stability enhancements and bug fixes:

For a complete list of features included in this release please refer to the release notes.

The user documentation for this release has been revamped and migrated to the new website - we think it looks much better and hope you’ll like it too!

This release has spread over a period of 5 months: a sustained effort from the core development team, QE team and our growing community - a BIG thanks to everybody involved! Please visit our downloads section to find the latest release. Also if you have any questions please check our forums, our mailing lists or ping us directly on IRC.

The existing CacheLoader/CacheStore API has been around since Infinispan 4.0. In this release of Infinispan we’ve taken a major step forward in both simplifying the integration with persistence and opening the door for some pretty significant performance improvements.

So here’s what the new persistence integration brings to the table:

Now let’s take a look at the API in more detail: 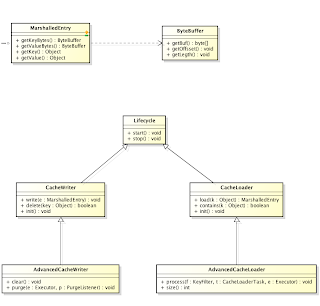 The diagram above shows the main classes in the API:

A provider might choose to only implement a subset of these interfaces:

If you’re looking at migrating your existing store to the new API, looking at the SingleFileStore  for inspiration can be of great help.

And finally, the way the stores are configured has changed:

As announced yesterday by Adrian, the brand new Infinispan 6.0.0.Alpha1 release contains a new file-based cache store which needs no extra dependencies. This is essentially a replacement of the existing FileCacheStore which didn’t perform as expected, and caused major issues due to the number of files it created.

The new cache store, contributed by a Karsten Blees (who also contributed an improved asynchronous cache store), is called SingleFileCacheStore and it keeps all data in a single file. The way it looks up data is by keeping an in-memory index of keys and the positions of their values in this file. This design outperforms the existing FileCacheStore and even LevelDB based JNI cache store.

The classic case for a file based cache store is when you want to have a cache with a cache store available locally which stores data that has overflowed from memory, having exceeded size and/or time restrictions. We ran some performance tests to verify how fast different cache store implementations could deal with reading and writing overflowed data, and these are the results we got (in Ks):

The difference is quite astonishing but as already hinted, this performance increase comes at a cost. Having to maintain an index of keys and positions in the file in memory has a cost in terms of extra memory required, and potential impact on GC. That’s why the SingleFileCacheStore is not recommended for use cases where the keys are too big.

In order to help tame this memory consumption issues, the size of the cache store can be optionally limited, providing a maximum number of entries to store in it. However, setting this parameter will only work in use cases where Infinispan is used as a cache. When used as a cache, data not present in Infinispan can be recomputed or re-retrieved from the authoritative data store and stored in Infinispan cache. The reason for this limitation is because once the maximum number of entries is reached, older data in the cache store is removed, so if Infinispan was used as an authoritative data store, it would lead to data loss which is not good.

So, if you’re a FileCacheStore user, give the new SingleFileCacheStore a go and let us know how it goes! Switching from one to the other is easy :)

We’re proud to announce the first Alpha release of Infinispan 6.0.0. Starting with this release, Infinispan license is moving to the terms of the Apache Software Licence version 2.0.

For a complete list of features and fixes included in this release please refer to the release notes.

Visit our downloads section to find the latest release and if you have any questions please check our forums, our mailing lists or ping us directly on IRC.

Thanks to everyone for their involvement and contribution!