The release contains multiple fixes and improvements listed below:

From this point on, the main development will continue in 3.x line. We are preparing considerable design changes, so that RadarGun can be easily utilized to measure performance of other areas as well (e.g. JPA).

For more information about RadarGun, feel free to visit our wiki page, or try five minute tutorial. In case of any issues, please refer to our issue tracker.

Thanks everyone for their contributions!

Map/Reduce Performance improvements between Infinispan 6 and 7

There have been a number of recent Infinispan 7.0 Map/Reduce performance related improvements that we were eager to test in our performance lab and subsequently share with you. The results are more than promising. In the word count use case, Map/Reduce task execution speed and throughput improvement is between fourfold and sixfold in certain situations that were tested.

We have achieved these improvements by focusing on:

The performance tests were run using the following parameters:

This test executes two word count executions on each cluster with an increasing number of nodes. The first execution uses an increasing amount of data equal to 30% of the total Java heap across the cluster (i.e. With one node, the data consumes 30% of 4 GB. With two nodes, the data consumes 30% of 8 GB, etc.), and the second execution uses a fixed amount of data, (1352 MB which is approximately 30% of 4 GB). Throughput is calculated by dividing the total amount of data processed by the Map/Reduce task by the duration. The following charts show the throughput as nodes are added to the cluster for these two scenarios: 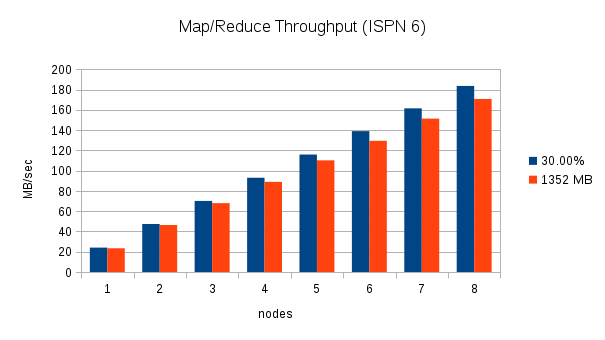 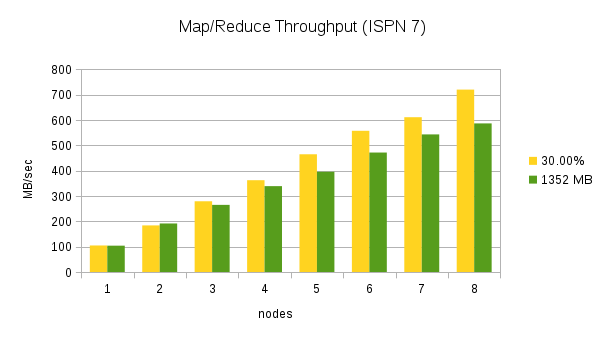 These charts clearly show the increase in throughput that were made in Infinispan 7. The throughput also seems to scale in an almost linear fashion for this word count scenario. With one node, Infinispan 7 processes the 30% of heap data in about 100 MB/sec, two nodes process almost 200 MB/sec, and 8 nodes process over 700 MB/sec. 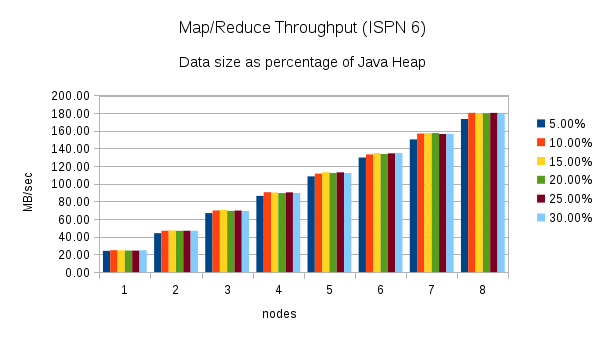 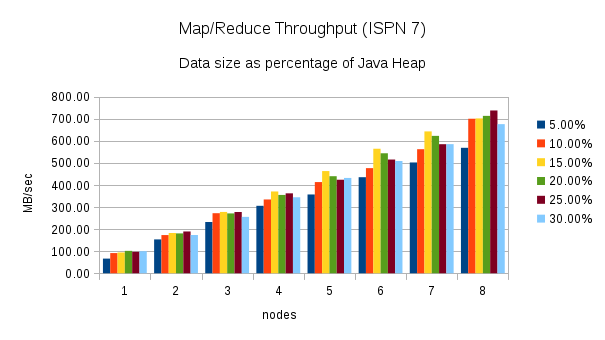 Once again, these charts show an increase in throughput when performing the same word count task using Infinispan 7. The chart for Infinispan 7 shows more fluctuation in the throughput across the different percentages of heap size. The throughput plotted in the Infinispan 6 chart is more consistent. 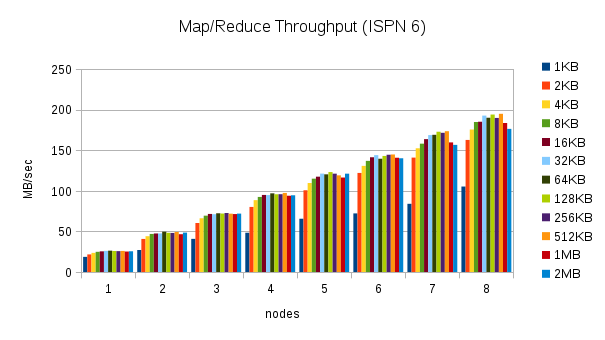 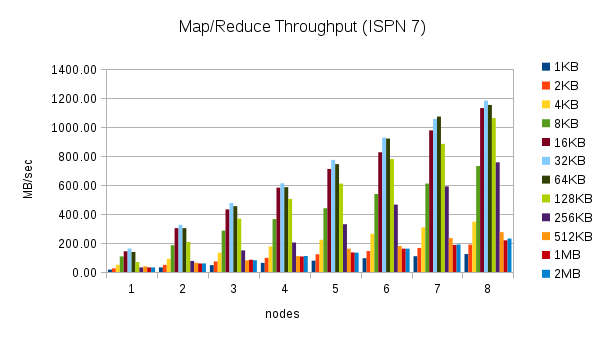 These results are more interesting. The throughput in Infinispan 7 is higher for certain cache size values, but closer to Infinispan 6 or even slower for other cache size values. The throughput peaks for 32KB cache values, but can be much lower for larger and smaller values. Smaller values require more overhead, but for larger values this behavior is not expected. This result needs to be investigated more closely.

The performance tests show that Infinispan 7 Map/Reduce improvements have increased the throughput and execution speed four to sixfold in some use cases. The changes have also allowed Infinispan 7 to process data sets that include larger intermediate results and produce larger final result maps. There are still areas of the Map/Reduce algorithm that need to be improved:

The single lock owner is a highly requested Infinispan improvement. The basic idea behind it is that, when writing to a key, locks are no longer acquired on all the nodes that own that key, but only on a single designated node (named "main owner").

How does it help me?

Short version: if you use transactions that concurrently write to the same keys, this improvement significantly increases your system' throughput.

Long version: If you’re using Infinispan with transactions that modify the same key(s) concurrently then you can easily end up in a deadlock. A deadlock can also occur if two transaction modify the same key at the same time - which is both inefficient and counter-intuitive. Such a deadlock means that at one transaction(or both) eventually rollback but also the lock on the key is held for the duration of a lockAquistionTimout config option (defaults to 10 seconds). These deadlocks reduces the throughput significantly as transactions threads are held inactive during deadlock time. On top of that, other transactions that want to operate on that key are also delayed, potentially resulting in a cascade effect.

The only encountered performance penalty is during cluster topology changes. At that point the cluster needs to perform some additional computation (no RPC involved) to fail-over the acquired locks from previous to new owners. Another noticeable aspect is that locks are now being released asynchronously, after the transaction commits. This doesn’t add any burden to the transaction duration, but it means that locks are being held slightly longer. That’s not something to be concerned about if you’re not using transactions that compete for same locks though. We plan to benchmark this feature using Radargun benchmark tool - we’ll report back!

Besides other cool features such as Map reduce and distributed executors, Infinispan 5.0.0 "Pagoa" brings some significant improvements around transactional functionality:

To summarise, Infinispan can participate in a transaction in 3 ways:

The benchmark was run on this Radargun configuration, using Infinispan 5.0.0.CR5 configured as shown here. As a TransactionManager JBossTS 4.15.0.FINAL was used, configured with a VolatileStore as shown here. Each node was an 4-core Intel® Xeon® CPU E5640 @ 2.67GHz, with 4GB RAM.

Each transaction spread over only one put operation. The chart shows the following:

And that’s not all! During Infinispan 5.0.0 development we’ve been thinking a lot about how we can improve transactional throughput, especially in scenarios in which multiple transactions are writing on the same key. As a result we’ve come up with some improvement suggestions summarised here: please feel free to take a look and comment!

Radargun is a tool we’ve developed and used for benchmarking Infinispan’s performance both between releases and compared with other similar products. Initially we shipped under the (poorly named) Cache Benchmark Framework. Due to increase community interest and the fact that this reached a certain maturity (we used it for benchmarking 100+ nodes clusters) we decided to revamp it a little and also come with another name: Radargun. You can read more about it here. A good start is the 5MinutesTutorial.